The Humane Obligation of Rebellion, or…Extinction Rebellion to World Rebellion! 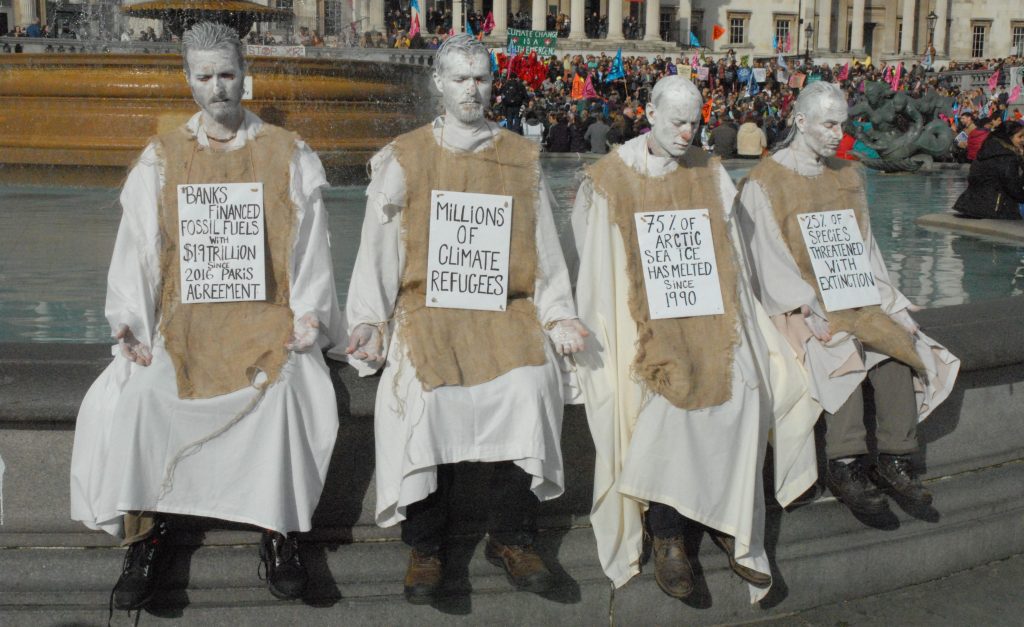 The world war of Democracy against its people is now official.
On Oct 20, 2019, Chilean president Sebastian Pinera publicly admitted the singular capitalist threat implicitly and silently embraced by virtually all politicians across our embattled Earth: Pinera formally declared war on his people. Said this corporatist salesman of the draconian and ever-expanding horrors of corporatist austerity- better known as greed:
“We are at war against a powerful enemy, who is willing to use violence without any limits.”
Then, Pinera had his army unload their weaponry on the non-violent protesters; attempting to kill the dreams of freedom by these impoverished Chilean people who had reached the limits of their human tolerance for this oppression. As a natural reaction, a million Chileans hit the streets to raise their middle fingers at Pinera and all he and his puppet masters stand for. Then they did it again. They continue to do so this day.
Pinera’s self-serving lie, however, had already been recently translated into English by another corporate lackey also no longer possessed of proper human conscience: disgraced former UK Prime Minister Theresa May, who, while departing No.10 for Brussels with her ever reddening barbed tail thus tucked between her bowed and knee scabbed legs, declared to the world:
“Populism will be the death of the Conservative party!”
In a democracy?!

Instead, non-violence was shouted, texted and reminded all day. XR well understands the historical dirty tricks applied by the forces of the status quo to the sincere calls for freedom worldwide.
XR is non-violent. That’s that!

Nothing More Than History…of Rebellion!
“Unlike Rome, we have not exploited our empire. On the contrary, our empire has exploited us….” – Ronald Steel
War has begun. Our politicians and world leaders have declared this war upon us. There is no other choice, for the leaders of the fascist governed world spawned by the scourge of humanity, America, has already armed itself to the teeth and thrown the gauntlet into our face as a challenge. What other message is there when this past week Zio-America’s piggish pimp, Sec. Of State, Mike Pompeo assured his capitalist puppet masters that his America, will,
“work with legitimate (governments) to prevent protests from morphing into riots and violence that don’t reflect the democratic will of the people,”
Of course, Pompeo failed to mention to his cover audience at the University of Louisville, in Kentucky: That “democracy” is dead to him and his ilk and that the “people” he refers to are whomever he and masters allow to be in power regardless of elections. In doing so, Pompeo has now, like Theresa May and Sebastian Pinera declared war.
But the war these aberrations of conscience fight is much more than for control of our lives, families and futures. Much worse, for this battle is for that of our minds, our free will and our existing proper conscience of man… one that continues to awaken exponentially across our ever more ravaged world and in our tortured souls. Scum like Pompeo exists as mere bullies who, without their hired guns and muscle, would soon suffer the justice of a well- deserved Mussolini style public immolation.
While the arbitrary metric of 3.5% may prove to be sufficient to foment world rebellion, what is for certain is that understanding of the need for resistance will directly and proportionally increase in reaction to capitalism’s desperate draconian responses. Extinction of the humane conscience is not an option. The human desire for freedom, family, prosperity, and a future are the correct traits of the sane mind.
In the eight years since Occupy was quashed the world has continued to spiral down the drain of a swap of corporate and political greed that has only been more emboldened by the lack of popular resistance and leadership.
Until now.
The return to the humane condition of rebellion is long overdue. For the past eight years it has smoldered, while the unconscionable forces of greed continued to increase the pressure in the false assumption that this fundamental human condition of man would always continue to endure their lashings, their hunger, their murder, or the blanket and wanton and absolute disregard for the value of human life except as chattel.
The human spirit will not tolerate this any longer. Twist the knife as you will! Each scream of anguish, each cry for freedom and every howl of protest from our oppressed world grasps at each and every remaining human heart. In any world language, any nation, any religion, race, colour or creed the correct conscience of man will never sacrifice the correct humane and fundamental right of humanity: Freedom…from oppression.
The organization that is Extinction Rebellion has been a good start. From what this reporter observed in a week on the streets and the dozens of text messages afterwards, XL is growing across Britain and worldwide while the Hour Glass logo flies in more countries every week. The ranks of protests worldwide have swollen and become emboldened. Yes, fascist leaders like Trump, Pompeo, May, Pinera, Bolsonaro, el-Sisi, etc. will use the only tool they know-force- to attempt to put the tear gas back into its lead bottle of fascism, but this will be met with even more rebellion and suffer a similar fate. History, the history of despots, dictators and false prophets will come again and will certainly meet the First Rule of Democracy. The correct conscience of man will no longer be denied.
*
There’s an energy one receives at large protests. It lasts.
Heading down the metal stairs of Charing Cross after a week my feet were light despite my backpack, now strangely tapping out a cadence long forgotten while skipping down to the train. One…two, three. One, two, three… and four, five. On the last flight down to the train landing my boots again accidentally click that same cadence on the metal stairs once again. One…two, three. One, two, three…and four, five. A rhythm? A beat. Weren’t there words?
Dead tired but smiling still I sit down and throw my feet up on the opposing blue seat, now humming and drumming to find those words missing from my mind: One…two, three. One, two, three…and four-five. That strange cadence, the cadence of a chant- a protest chant- from a lifetime ago.
One…two, three. One, two, three…and four-five. Struggling, the words slowly coming back, buried too long under the last eight years of growing madness.
One…two, three. One, two, three…and four, five. That’s it! My favourite chant from those bygone days of Occupy, days that, after a week on the streets, have suddenly returned. To my mind!
“Shit’s… fucked up!
Shit’s fucked Up…and bullshit!”
“Shit’s… fucked up!
Shit’s fucked Up…and bullshit!”
These words rang still true that moment as they suddenly passed my lips for the first time in years. I said them again. And then, again.
So these past few weeks, when listening closely to the winds blowing across London one could hear the people’s distant echoes, their chants, their screams …coming through in dozens of languages across the globe. Their voice, as one, growing ever louder daily as we shout one collective statement: our Global populist challenge to those who- out of correct humane obligation of conscience- we now come for.
Chile…Rebellion!…Iraq….Rebellion!…Haiti…Rebellion! Albania….Rebellion! Israel…Rebellion!
Extinction…Rebellion!
World… REBELLION!
It is time.