New Ecological Disaster…Right Over Your Head. 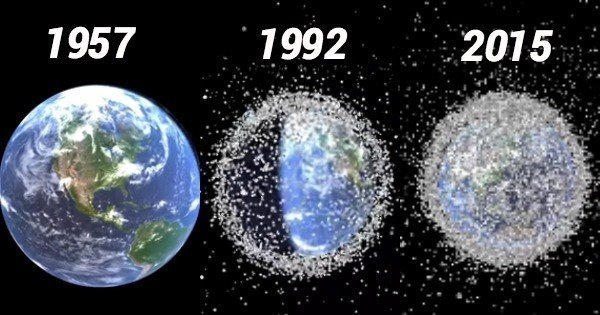 Sixty-two years ago on Oct 4, 1957, the first space pollution entered the earth’s atmosphere from Russia’s Sputnik spacecraft. After decades of profitable degradation of our terrestrial environment by governments and corporations, the astral environment is cause for serious concern.

Seen a shooting start lately? If so, it is likely due to one of the approximately 5,000 active or deceased satellites, or 750,000 other pieces of debris big enough to be tracked by NASA coming back to earth at over 18,000 miles per hour.

This pollution goes on with impunity and without regulation or the cost of any clean-up right. For decades scientists have called attention to the space debris problem flying above our heads. Two Earth orbits, LEO (low-earth orbit: 1,200 miles up) and GEO (geostationary orbit-22,000 miles up), are the most cluttered. GEO has a lower collision risk due to its sheer size, but LEO being the most profitable contains by far the most debris and risk. Global Warming has caused these orbits to become narrower and the debris more concentrated and reduced the amount of friction that slows space debris and drags it out of orbit; further concentrating the space junk.

At minimum space junk poses a threat to military and private communication satellites. More than 194 breakups and 51 events in which debris was shed from an object have been recorded with the most notable being the 2019 collision of an active U.S. Iridium 33 satellite and the defunct Russian Kosmos 2251 which created about 2,000 more tracked objects.

Profitably, international law makes any efforts at clean-up, regulation or reduction difficult. The 1967 Outer Space Treaty and the 1972 Liability Treaty gives launching states jurisdiction and liability over their space objects. Governments thus have a reason to ignore debris removal projects, since they could be responsible should those missions go wrong.

Like Global Warming, profitable degradation-of space- may lead to its own ultimate catastrophe.