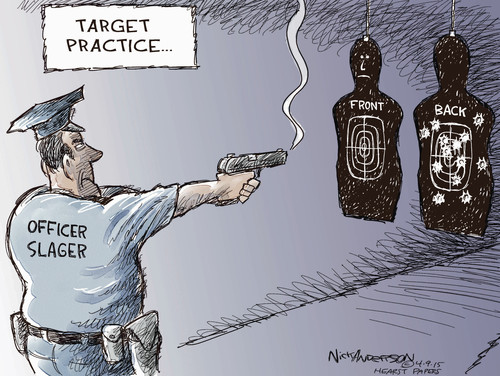 One. Two. Three. Four uniformed police passed my window… moving silently, even paced, side-by-side, thirty feet from where I sit. The  four black from head to toe, locked and loaded, black gloved fingers on triggers, staring from under black helmets straight through the lenses of high powered black scopes down the barrels of  black automatic rifles pressed tightly to the shoulder pads of their matching flack jackets.

America’s authoritarian machine was in full force. On my street.  Moving fast.

In moments our quaint four-block area of coastal north San Diego County would be sealed off. In our troubled times cops do as they please. When violating Constitutional protections they don’t like being seen. This scene, fiction? No. My street. America.

Cover, in the form of a small army, was coming. Full speed.

Many possible reactions come to mind in those longest two seconds when one decides what to do with unfathomable facts at hand. I grab my camera. Cell phone? The first few pens and pencils my frantic fingers can grab. Stuffing notepads in back pocket, slinging the camera over my shoulder, heading for the door

Press credentials remained behind, swinging wildly on my office door knob. We would not be welcome tonight.

Dashing for the front door. My two dogs, sensing something very much wrong,  staring at me quizzically, ears tilted forward with concern. It would be fifteen long hours before I would see them again.

Heading left out the door at a trot I gained ground on a shallow hill of our quiet, old San Diego dead end street. One hundred feet ahead; a very obvious, bright red Encinitas paramedic vehicle. Good luck! The paramedic, standing next to the truck; an old teammate.

“One’s inside,” he nodded at his vehicle. “The other’s en route,” he added, meaning the hospital.

Neither cop in serious condition. Single shotgun pellet to the leg for one. The second had been grazed. Small gauge weapon. The wound was small. “Birdshot”, concluded the paramedic who’d seen the wound of the second cop.

I turned, advanced uphill. A woman standing at the front of the vehicle, sobbing into her sleeve, no one helping her. A neighbor. The Mother.

A well-meaning neighbor arrives from across the street to help. I’m off. Senses overloaded.

Further around the corner a woman cop,  hunched over, cell phone pressed tightly to her ear. Trying not to be heard.

” Evan! Evan! Stay on the line,” I hear her saying as I approach from behind. Hastily she moves forward, beyond the group of three cops finishing a white and yellow striped barricade in my way.

Down the shallow hill of Del Rio, two hundred feet away I can see those four menacing all black-on-black cops. Crouching. Locked and loaded across a single black and white police cruiser. Aiming at a single story house on the left.

“Evan” was in real trouble.

Evan Kwik  a troubled twenty-two year old had caused trouble before. Mostly for his parents. In our neighborhood he was pretty much unnoticed growing up, until he moved on to drugs. Hard drugs. Heroine. Neighbors all said,  “He had a good heart.” But Mr. Jones is tough master indeed. Problems always follow him to the junkie’s door.

Parents Michelle and Steven split years ago. Mother and son at constant odds. Arguments. Fights. Police called multiple times. Swat team had been called before. No arrest record, though. Not yet. Just a kid growing up, making poor choices.With his whole life ahead? Maybe.

Kicked out of home and under court order to stay away, Evan Kwik has returned home to,      “steal” his Mom’s car. The cops, they arrive quickly. So does Evan Kwik. So intent on stealing the car has had just returned from borrowing it.

And so it goes. Troubled youth. Broken home. Parental problems. Life sucks when you’re a kid. Same old story as a million other kids trying to grow up before they can’t.

Now Evan Kwik was in a dark cramped attic…clutching a shotgun. Surrounded by a very keen, very agitated and growing militia.

With my big lens I get a close up view of Evan’s mother’s house. The crime scene. Looking beyond it, two hundred yards down Del Rios Street to four-lane Leucadia Blvd, the cops were erecting yet another barricade. Four identical all-black-clad militants pressed themselves across the hood and trunk two more black-and-whites. Rifles ready. Two hundred feet closer, almost in front of the crime scene house, four other cops in standard light brown County Sheriff’s Department uniforms were staying undercover behind one more black and white. Sidearms drawn.

Now, looking back to my left beyond my house, down the shallow hill of Puebla St., two more waves of four cops each, clothed all in black with yellow “Police” marquee front and back,  methodically come towards me and four neighbors, all staring wide-eyed at the unfolding Kafkaesque drama.

Common sense, a healthy respect for Darwinism, and the need to get this story, indicated I should not be the standing here long. The old days of allowing citizens to bear witness are, these days, at the whim of the cops. These cops. The ones pointing eight automatics in my general direction. And coming uphill straight at me.

I’m as trapped as Evan Kwik.

“Damn! I’d give anything to get closer”, I said in exasperation, and in the direction of a lady  I barely know. ” They’re gonna lock this place down any minute. And us out.”

“My house is across the street”,  my neighbor offers, without looking away from the unfolding crime scene.

“Your House. Across the street?”I ask in disbelief.

Getting substantially closer, by passing through sixteen trigger-happy special forces with eight more about to join in, seems like a good idea at this juncture.

Unfortunately the problem of the growing army between us and her home was obvious. I indicated the problem, pointing down Del Rio Street.

No better option. With no time for discussion, and a whispered thanks to the devine,  off we went.

There is a certain savor in deliberately flaunting authority. Add a growing police presence and the heart rate will increase proportionally. So adrenalized we were.

As we hurried away from our vantage point, four all-black full-sized suburbans, sporting menacing black windows, screeched to a stop at the bottom of Puebla St. Cops in plainclothes jumped out, primed for action.

So why did Evan Kwik go up in that attic with that shotgun? The answer, so far, was missing. Of course that was the real story.

San Diego  Sheriff’s officers Colin Snodgrass and James Steinmeyer responded to the call about a stolen car. After talking to the mother who owned the car, they failed to see this as domestic dispute. So when Evan Kwik returned home to his Mom’s house with the “stolen” car, they knew just what to do.

Well trained they were, and showing the kind of patience and restraint cops are renowned for today, they wisely followed their own hypothetical police protocol in dealing with problem kids like Evan Kwik.

They lobed three tear gas canisters into the living room.

So up to the attic went Evan Kwik. Shotgun in hand. The kid’s not stupid. Under the circumstances, self-preservation made perfect sense. More sense than Officers Snodgrass and Steinmeyer.

With their quarry firmly trapped eight-feet up, with no way out, Snodgrass and Steinmeyer  decide that this extreme emergency could not wait for back-up.  Nor a supervisor. Or reason.

Evan Kwik and his shotgun had only two possible views from under his mother’s roof. The attic vents on either end of the house. In their bravado these officers of the law failed to notice their exposure and decided it would be wise to climb over the wooden fence between the house next door. Right in front of the north-facing vent.

By all reports from neighbors close enough to hear the blasts, two shots were fired. Now a military hell was breaking loose. All for Evan Kwik?